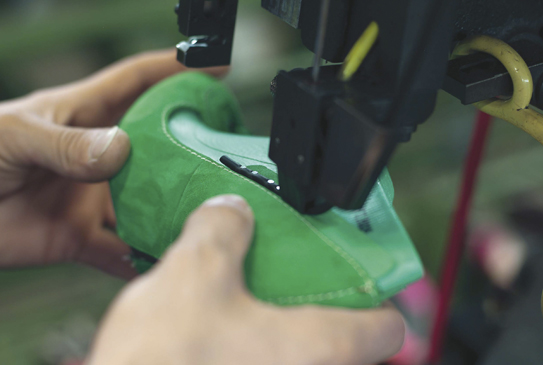 INESCOP brings together the Erasmus+ ICSAS (Integrating Companies in a Sustainable Apprenticeship System) project partners in Elda to work on the development of Dual Vocational Training on the footwear sector in countries such as Romania and Portugal, where it has not been implemented yet.

During the 15th and 16th of January, ICSAS partners gathered at INESCOP to work on the possibility of offering countries with no experience in work-based learning, such as Romania or Portugal, the opportunity of implementing Dual VET, a training modality that is already operative in the footwear industry. Furthermore, this project also seeks the creation of a Sectoral Qualification Framework for the industrial production of footwear, as well as the development of training material for footwear tutors from all countries.

During the meeting, the partners commented on the next steps towards the development of a transnational Sectoral Qualification Framework for vocational training on footwear, common to the four partner countries (Germany, Spain, Portugal and Romania), and discussed the differences between the different national qualifications frameworks.

In addition, Romanian and Portuguese partners showed their progresses in the implementation of the one-year pilot programme, which started in October and November respectively. The results of this pilot will be evaluated by the partners after its end, as well as by the students and tutors in both countries.

The three-year ICSAS project has the support of the European Commission through the Erasmus+ programme and is coordinated by the University of Bremen. This project relies upon a consortium comprising the International Footwear Competence Centre of Germany (ISC), the Portuguese Footwear Technology Centre (CTCP), the Technical University Gheorghe Asachi of Iasi in Romania and the companies Carité Calçados Lda., Gabor Shoes AG., and Papucei Angela International.

The next progress meeting will take place in June in Iași (Romania).